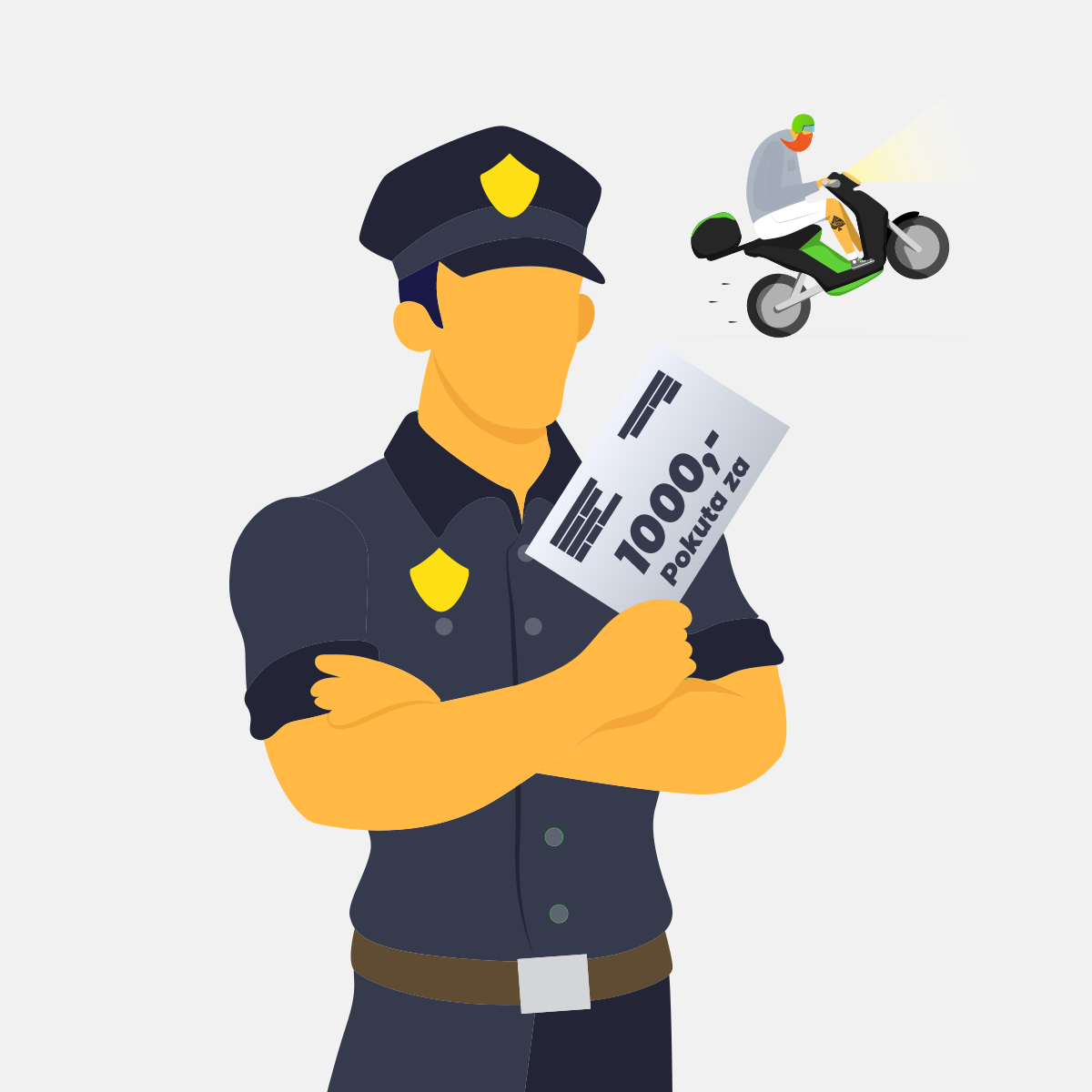 An expensive journey outside the law: The most common offences and fines for scooter and motorcycle drivers

October 10, 2022
A fine for parking a scooter on the pavement, riding without a helmet, or even without a licence, riding along a cycle path… We have identified the most common offences committed when riding a scooter and the fines you may face, one such example being the much-debated passing through the middle of a line of traffic.

Giving in to a child's pleas to be taken for a ride, taking that short journey without a helmet, lending the scooter to a friend without the right licence... The situations that every scooter or motorcycle rider has gotten into at one time or another can get pretty expensive – not to mention dangerous. In many ways, a scooter is an ideal means of transport. Riding one is transportation and fun at the same time and its dimensions and properties are – particularly in the city – extremely practical, but also easy to abuse. What happens if you cross the boundaries of the law on a scooter?

Riding without a driving license

Let's start with the biggest. A fine of 25 to 50 thousand koruna and a driving ban of one to two years. That’s what you can expect for riding without a driving licence. A class B licence is enough for scooters of up to 125 cc and electric scooters such as BeRider. But if you have just entered the world of motorcyclists, be prepared to hear your friends who do not have a licence at all or whose licence is not enough to be able to ride your own "big" motorcycle start begging: "Come on, it doesn’t run on papers. I just want to try it on this wee bit here”. The answer should always be 'no'.

Driving without a licence actually means driving without a licence for the specific type of vehicle you are driving right then. We at BeRider check the "papers" held by all of our riders and no one without a driving licence can register in the application, meaning they can’t ride one of our scooters. The scooter should always be ridden by a registered rider only and should not be lent to anyone. If this should happen, the registered rider faces a fine of CZK 10,000.

Riding without a helmet

Not only is riding a motorcycle without a helmet a dangerous gamble with your life – it can also cost a lot financially: an on-the-spot fine will cost you up to CZK 2,000 and 4 points on your licence. Learn to put on a helmet automatically before getting on a motorcycle or scooter and “leave it on your head” until you climb off. Automating this routine eliminates instances when you decide that you’re just going to “re-park the scooter over there” without your helmet – even then, a police officer might be lurking around the corner, or an accident might happen. Before actually riding on BeRider, we give you 1 minute free-of-charge, precisely so you don't underestimate the preparation needed for your journey.

Your helmet should be of an approved type (ideally, European ECE standard, but we also tolerate the American DOT or the British SHARP). There’s no need to worry about this with us, though: all BeRider helmets meet the ECE standard. Even the ones you can buy from our e-shop. On the other side of the coin, buying a cheap helmet from an Asian e-shop, for example, might not be worth it, for safety and other reasons.

Did you know that there are states where it's perfectly legal to ride a motorcycle without a helmet? In the USA, we’re talking about Illinois, New Hampshire, and Iowa. In many other states (for example, Utah or Colorado) only minors need to wear a helmet. In other countries (such as Egypt or some Asian countries), wearing a helmet is "not taken too seriously" and the police generally do nothing about it.

Riding without a visor or glasses

In addition to the helmet, protecting the eyes is the only element of passive safety that is directly imposed by the Czech Road Traffic Act. This means that when riding a scooter or motorbike, you must always keep your protective visor down or wear glasses (sunglasses or spectacles will do). Beginning in 2022, the transmittance of the darkened plexiglass visor should not exceed 35% according to the ECE standard. It is therefore advisable to pay attention to this rule when buying a new helmet.

All BeRider helmets are equipped with a clear visor that protects the whole of the face, which you can wear with sunglasses on bright days. Or simply buy a helmet with double plexiglass from our e-shop.

Did you know that in some countries it is mandatory by law to wear additional safety equipment? In Belgium, for example, you may not sit on a motorcycle or scooter without ankle boots and clothing with long-sleeves and long trouser-legs.

Every once in a while, a motorcycle or scooter tempts us to take a shortcut we shouldn’t. In addition to the fact that it can be dangerous, it can also cost us quite dearly – you can pay a fine of CZK 1500–2500 for riding into a pedestrian zone. And caution: a scooter of over 50 cc should not ever be taken into a pedestrian zone, even with the engine switched off, or indeed parked there!

The same fine applies to riding on a cycle path or any other place where motor vehicles may not enter, as well as in dedicated traffic lanes marked "taxi, bicycle, bus" or for the emergency services or the metropolitan police (MP). Best not to try the in-joke among Czech motorcyclists that “MP” means “moc pospíchám” (I’m really in a hurry) on police officers…

Did you know that scooters can use cycle paths in some countries? But only motor or electric scooters with limited power and maximum speed of 25 km an hour, and often a special registration mark. This is the case in Slovenia or the Netherlands, for example.

Riding with a child under 12 years of age

"Uncle, will you take me for a ride on the scooter? Please, please, just for a while!" The enthusiasm you might see in the eyes of children eager to ride a scooter or motorbike can be hard to resist. But remember: you're treading on thin ice here. On the one hand, you are taking on a massive responsibility, and on the other, you might end up crossing swords with the law and paying a fine of between a few hundred and 2,000 koruna. It is forbidden by law to carry children under 12 years of age as a passenger on a motorcycle in the Czech Republic, and even then the child’s feet must reach the deck.

Teenagers should then be instructed on how to behave properly as a passenger; for example, not to counterbalance when cornering, and how to hold on properly. They should always have a well-fitting helmet with certification. The best idea is to try a test ride in a car park first.

Did you know that in some countries it is normal to carry children on a motorcycle? If we ignore Asia, where you might find the whole family on a scooter, including the dog, we should mention Belgium, where a child can be carried in a special seat from the age of 3, France (from the age of 5), and Norway, where the law does not set an age limit at all.

Riding through the middle of a line of traffic

If you ride through the lane created in a line of traffic to let an ambulance pass, for example, you will face a fine of 5–10 thousand koruna and perhaps even a ban on driving for up to a year. In this case, the law does not distinguish between a car and a motorcycle, so this sanction should apply to motorcyclists by law too. We do know, however, that the reality is slightly different – if a rider does not take advantage of the sort of emergency lane mentioned above, but simply rides carefully through the natural gap in a line of traffic, he/she is usually not in danger of being penalised. The law on passing through a line of traffic on a motorcycle is rather vague and is accompanied by a few urban legends.

"If I don't cross the dividing line, it's not really overtaking." "If I put the indicator on, it's just overtaking, and that's allowed." All unsubstantiated speculation. The very fact that Czech police officers are often benevolent when it comes to passing through a line of traffic means that we should be all the more grateful and behave with respect – no riding "fast and furious", use indicators as your should, or even indicate to drivers by hand - meaning "read" the traffic in front of you and, if confronted by the police, do not try to beat a person of the law with unsubstantiated arguments.

Did you know that in France, the law allows a motorcycle or scooter to pass through the middle of a slow-moving line of traffic? The aim of this change is to ensure the fluency of urban traffic and the safety of motorcyclists. Other countries are considering introducing this change (it has also been a topic of discussion here).

Parking on the pavement

And finally, something that we at BeRider keep on trying to explain. One of the most common offences committed by motorcyclists is parking on the pavement, again backed up by plenty of urban legends; such as: "I can legally drive a scooter or a moped of up to 50 cc on the pavement, which actually means that I can park it there too... and there’s no real difference between 50 cc and 125 cc or electric, so I can even park there on a giant BMW GS motorbike." That's really not how it works.

While parking a scooter or motorcycle on the pavement is sometimes tolerated, it can also lead to a fine of around CZK 100–500 and, worse than that, a very unpleasant wheel clamp. You should know that this really does happen, particularly in some of the "most popular" locations – in Prague, for example, on Náměstí Republiky or in the Letná area. If you still aren’t fully experienced in parking a scooter, you can find all the information you might need in this BeRider blog post.

Did you know that a motorcycle can park for free in residential areas? This is something that car drivers should be aware of – it is not uncommon for them to move a properly parked scooter to the pavement in order to get a parking space. The result of this is that the owner of the scooter can be fined for being on the pavement, while there is also the risk of damage to other people's property.

Riding under the influence of alcohol

An absolute "no go." If you have alcohol on your breath, but less than 0.3 per mille, this is classed as an offence and is met with a fine of between CZK 2,500 and 25,000 as part of administrative procedure, a driving ban for 6–12 months, and an automatic 7 points on your licence. Higher alcohol content on your breath (up to 1 per mille) is a more serious offence, and while the range of punishments is the same, it is best to count on the upper limit. Driving with more than 1 mille is a criminal offence, with a fine of up to CZK 50,000. On top of that, your driving licence will be taken from you for up to two years and you will face up to one year in prison!

As of 1 January 2022, not even a passenger on a scooter may not have consumed alcohol. If the passenger is found to be intoxicated, he/she is liable to an on-the-spot fine of CZK 2,000 or between CZK 1,500 and CZK 2,500 in administrative proceedings.